Delete my post while I'm typing it will you blogspot! grrr…

Zombie Tomato Attack hath been released unto the world! 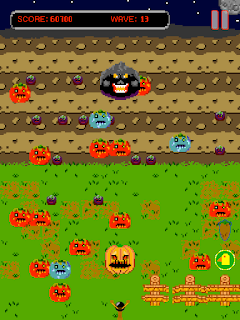 I've had the idea for this one for awhile now, even before Duck Rush, so I'm glad I finally got it finished. If you like Commanding Missiles and shooting down Invaders from Space, then you should like the gameplay style here.

I've been working on updating it to have, among other things, proper universal support. Granted, GM:S does a good enough job on supporting multiple iOS device resolutions, they still need tinkering with.
Drawing text goes off screen and gets misaligned, and on 5th gen devices it stretches the screen. Not too bad, but leaving like that would just be lazy (cough duck rush cough).
Plus, I've had a number of folks inquiring about an android release.

I WANT to do a android version, I really do, but a few roadblocks prevent me at the moment.

1. No android phone or device. More likely a phone but whatever. Hell, I don't even have my Trac-Phone anymore.
2. GM:S requires an extra module for android exporting, and at 200 smackers that will have to wait…
3. For what device? It's probably not to much of a hassle supporting multiple device resolutions, but until I can at least get one, I have no idea.
Now that's not a knock toward android either. I'm rather "meh" on the whole iOS vs Android debate. I've seen a android or two that I wouldn't mind having, but until I can afford one, it's iOS (by way of iPod Touches and an 1st gen iPad) for now.
Shit, I'd like an Ouya while I'm at it. If Locomalito can do it then, dammit, so can I!

So, if you want more and android versions to-boot, then would you kindly…
Posted by sgtcrispy at 8:50 PM

Labels: They're coming to get you Barbara...